Quick Guide: Everything You Should Know About How Dolphins Mate

Whether you're a casual dolphin enthusiast or a serious student of the natural world who is captivated with these playful marine mammals, you are undoubtedly delighted by the antics and obvious intelligence. If you have ever found yourself wondering how dolphins mate, that's only natural -- after all, they are highly social creatures who exhibit a great deal of creativity and individual differences in other aspects of their lives, so why should their mating habits be any different? This cognitively advanced species are said to mate for purposes beyond procreation, below is a brief overview of the courting and mating rituals of bottlenose dolphins.

Dolphins are not monogamous animals and do not typically mate for life. Atlantic bottlenose dolphins live in what are called fission-fusion societies, where pods are constantly changing in size and numbers. Some believe bonds between males are the strongest and most enduring in bottlenose dolphin societies. Females, on the other hand, tend to maintain weak-to-moderate bonds with other females that are more complex and less stable over time.

Courtship and copulation behaviors have been documented both in captive and free-ranging populations and are often characterized by open mouth displays, s-posturing, erratic swimming patterns, as well as vocalizations. These interactions are suggested to be crucial in the development of the social bonds among individuals, reduce stress, resolve conflict, serve as a form of play, and establish dominance, regardless of age class or sex. Due to the importance of these interactions, sexual behaviors are often performed outside of the reproductive context.

The age at sexual maturity varies greatly in bottlenose dolphins between regions and populations. Sexual maturity is usually a function of size, not age. A female typically reaches sexual maturity when she has attained 85 – 95% of her mean adult body length. This ranges from 7 – 12 years, depending on the population. Males attain sexual maturity later than females, typically occurring between 10 – 15 years. This phenomenon of the sexes achieving reproductive maturity at different times is called “bimaturism”. 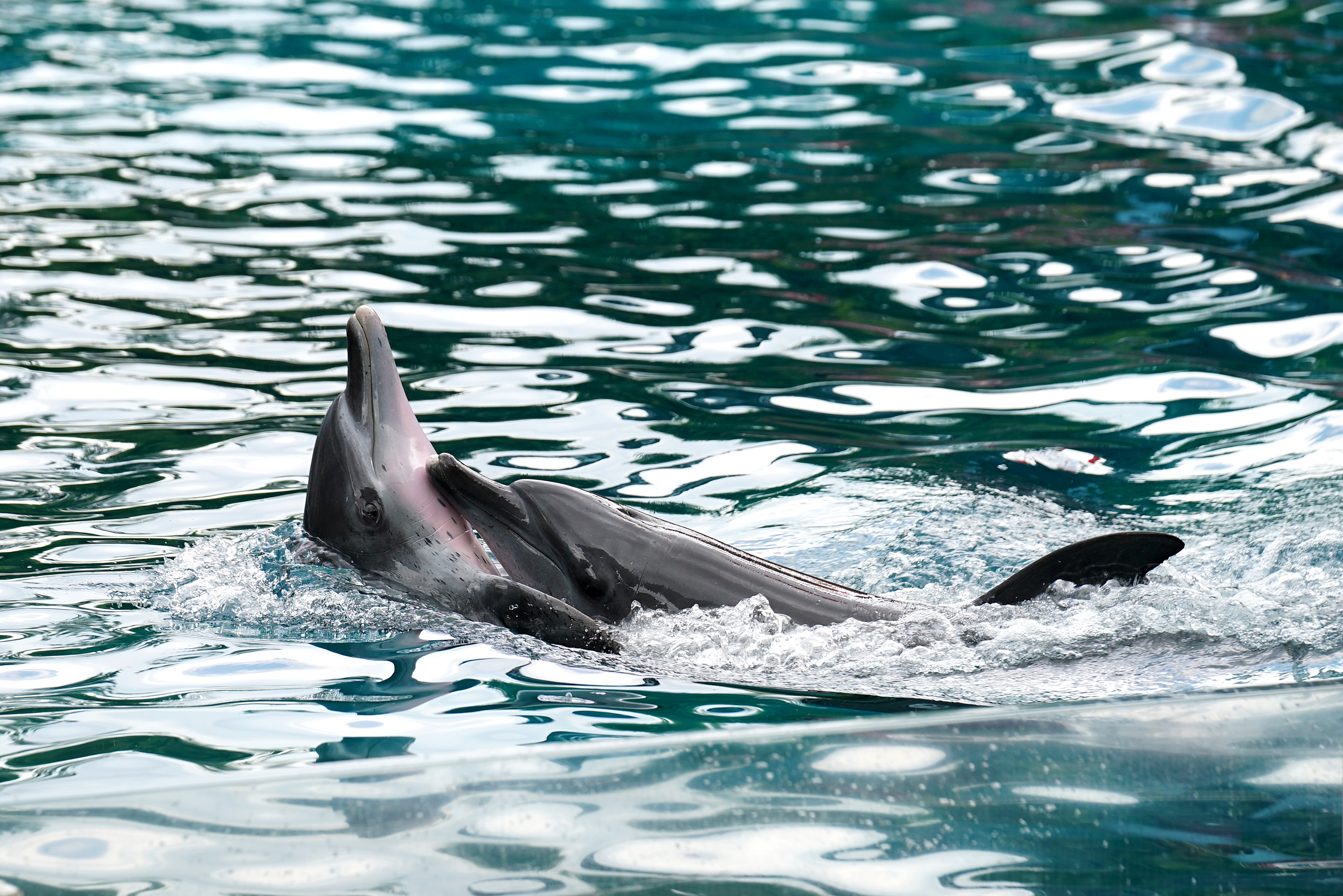 Sexual selection among mammals describes dimorphic roles among males and females. Phenotypic and reproductive characteristics, such as body size, parity and offspring size, are suggested to play a significant role in mate selection.

Mating behaviors, such as courtship displays, promote the development of breeding pairs, potentially leading to the production of more viable offspring and eliciting enduring pair bonds. Similar to large brained, non-human primates, the frequency of mating behaviors observed is influenced by the age and dominance of males and females, as well as parity, suggesting that social and reproductive characteristics vs. phenotype (i.e., size) have a significant effect on mate choice in bottlenose dolphins.

Dolphins are mammals and therefore, give birth to live young. The gestation period for bottlenose dolphins is approximately 12 months, and calves are usually born tail first. The birth process can take anywhere from 30 minutes to 3 hours.

At birth, a bottlenose dolphin calf is about 3 – 4 feet long and weighs 30 – 40 pounds. They are born with their dorsal fin flat on their back, and their tail flukes curled. The dorsal fin is usually standing erect by about 24 – 48 hours after birth, though it may remain wobbly for many years. Their flukes also flatten out within 24 – 48 hours. A newborn calf is generally dark in color with light stripes called fetal folds. 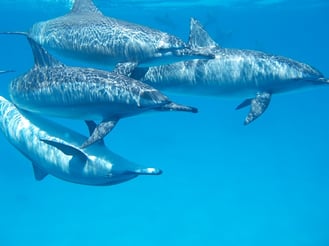 For all marine mammals, the normal number of offspring at birth is 1, which is believed to reflect the immense amount of care invested in a single offspring. It is unlikely that a mother would be able to offer the care necessary to survive to multiple neonates at the same time.

Research suggests that paternal investment is virtually nonexistent, specifically among bottlenose dolphins. Postpartum maternal care is the primary influence in a calf’s life. However, maternal pods of related and unrelated females will share in the duties of temporary calf rearing. Males have been documented swimming in close proximity to calves during mother-calf interactions; however, adaptations of male care have been reported across several mammal species, as well as bottlenose dolphins. It is theorized that males in some non-obligated species may engage in offspring care to achieve increased genetic fitness, develop stronger bonds with fit mates, increase reproductive output, improve offspring survival, and/or decrease inter birth intervals.